5 Courses, a Mohawk and Blue Hair

I have been a fan of Katherine Sabbath and her colourful creations for quite some time now so when the opportunity came up to be part of an evening celebrating her awesomeness and hosted by Anna Polyviou in her very own kitchen, a few friends and I had to jump on it! Part Charlie and the Chocolate Factory part Alice Down the Rabbit Hole, the evening was nothing like I expected but so much more …..

A 5 course dessert degustation at the Shangri La hotel, Sydney conjures up images of champagne flutes, background music, views of the city lights and of course, amazing desserts. 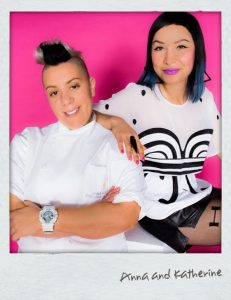 Insert Katherine Sabbath and Anna Polyviou and you have a sugar bombed pastry kitchen in the bowels of the Hotel complete with DJ, balloons, Piñata, Cupcakes, lollies and splashes of edible colours spread across the stainless steel benches and of course amazing desserts!! 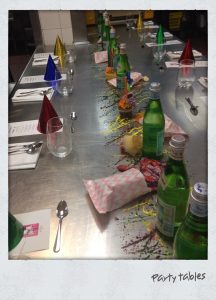 The evening did start with quiet time as we all gathered in the lounge, excitedly sipping our Mary Fairy Pickford’s and nibbling our creative little canapés!! Being a coeliac, one is often Limited as to what one can eat and drink … I decided to throw caution to the wind that night and (selectively) eat everything I saw!

As we were led down the stairs by one of Anna’s Pastry team, the scent of molten sugar filled our nostrils. I can honestly say we were all surprised to see Katherine standing behind a giant fairy floss machine at the base of the stairs. Her smiling face welcoming the lucky group as she spun pink sugar and chatted away to her guests.

Ushered into the Kitchen, we could see it had been transformed Into a kids party room for adults. We all oohed a aahed as we took our seats amidst the colour and noise of the pumping DJ, streamers and Balloons!

Anna was the perfect crazy host with her trademark Mohawk, Chefs whites and entertaining stories…… She took great pride in inroducing us to her dedicated staff and  Katherine and the idea behind the evening, with enthusiastic flair. 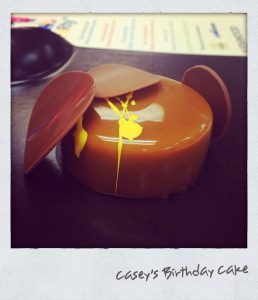 A specially created dessert for Anna’s Girlfiend this was a combination of Banana, passionfruit and caramel with a biscuit in the base that I ate around! The passionfruit lay hidden within that silky caramel layer, hardly noticeable until BAM there it was! YUM. 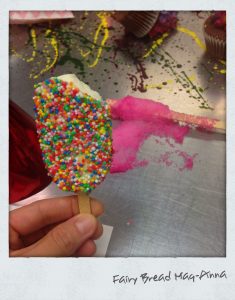 A take on the Magnum (my favourite ice creams in the world) they were miniature fairy bread looking icecreams – sprinkle encrusted white chocolate coated icecreams on a stick. I skipped the serving of real Fairy bread on the plate and headed straight for the icecream. I had just hit the the raspberry jam centre, when my party guest on my left suggested, the icecream tasted like bread. I got a little nervous that the gluten was hiding from me beneath those chocolate walls. So picked off the chocolate and dug out the jam. Its all good,.I’m used to it! 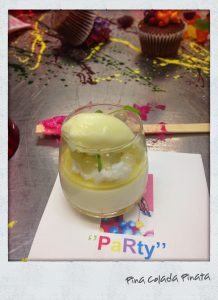 This little cutie was to refresh our palate after the intense sugar hit we were having. Lychee balls, panna cotta and baby coriander with a sweet rice surprise. This was one safe and I ate the lot! 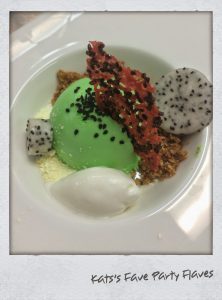 A homage to Katherines Birthday cakes as a kid. Never eating a “normal” birthday cake, hers were always made with vietnamese flavours of Pandan, coconut and black sesame. The Dragonfruit in this dessert actually came from her Grandparents own Garden. With a salted caramel injected centre, this was one of my favourites. Not too sweet but silky smooth, with the nicest little coconut and sesame bark on the side.

In between desserts Katherine wandered between the tables chatting to all of her guests, thanking us all for spending our time with her and answering any and every question that came her way. I think she might just be the sweetest person I have ever met. Impossible I know, but she is even nicer in person than she appears in the photos of her Instagram feed.

To give us a break from all that eating, It was time for our Masterclass with Katherine and the secrets behind making her Black Unicorn Rainbow Hamburger Mini Cakes. Black  Cake buns, and red cake patties, green chocolate cheese and Swiss meringue buttercream condiments. They were finished off with rainbow coloured sesame seeds and surrounded with Pink Persian fairy floss!! The best part was we all got to take one home!!  4 kids and 1 cake does not a happy household make! I had to preplan the nightmare and take some Balloons home to share! 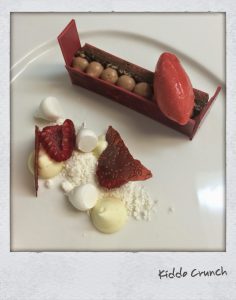 Called the chocolate crackle I assumed I could not eat this one but was super excited when Anna explained the “chocolate crackle” was made from Cocoa Nibs and dark chocolate … So I ate the lot! This was definitely my fave of the night. There so many different elements to it, crunchy, salty, silky smooth. Crisp tempered chocolate and smooth chocolate mousse. YUUUUMMM!

After so much food my stomach was starting to gurgle. Not sure if it was because I had consumed a whole heap of gluten or simply a sugar overload but I wasn’t taking any chances at this stage of the night. Enough is enough i said as I picked lollies up off the bench to eat!

We finished off this amazing night with Photos and conversation, social media connections and stories of how we came to be sitting in this Kitchen sharing a love for all things sweet. 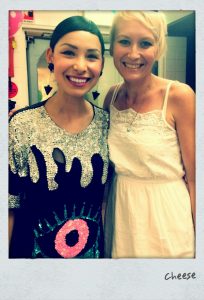 How did I survive a night full of desserts as a coeliac??  If I could see the treacherous gluten staring at me from the plate, I ate around it. If I knew for a fact, that it was hiding beneath some of the layers I would avoid just those layers. But if I did not know, I chose not to ask and ate to my heart and stomachs content. And I will probably pay for it!

Thank you Katherine and Anna for having me. It was a night to be remembered!! 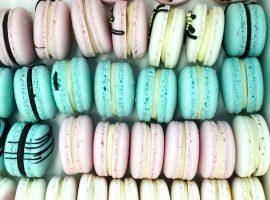 It's a Love-Hate thing

It's All Fun And Games Until Someone Loses A Leg